Thank you to everyone who supported sports day. Special thanks go to all the volunteers who helped make it such a wonderful day - especially our former pupils from Alban Academy and our parent volunteers!

On May 3rd our year 3 and 4 Kwik Cricket teams took part in the qualifying tournament for the East Bedfordshire Competition. Both teams were outstanding in their performances as they both earned places in the final having won their group matches. The A team scored the highest points of the competition and the B team came equal second.

In the finals on Wednesday 17th May, the weather was atrocious with torrential rain throughout the morning. This meant that wet weather rules were applied, which basically just involved bowling and no batting. Nevertheless, both teams performed brilliantly and were placed equal 3rd in the competition. Congratulations to all of our players for their high level of skill, determination and sportsmanship.

Coming up this term is Quad Kids Athletics and tennis.

In February, we took a team of 10 (boys and girls) from Key Stage 1 to a multi-skills tournament at Mark Rutherford School. The children had a fabulous time putting to test their football and athletic skills and we are proud to announce that in the competition our team came first overall. What a fantastic achievement for the children in their first opportunity to represent the school!

It was a very closely fought finals for our A team. After all of the matches, the team were equal first with St Andrews Biggleswade, unfortunately we lost on the number of tries scored. The team played phenomenally and were unlucky not to go through to the County finals. Thank you to everybody for their hard work and especially to Miss Larham and Mr Parker for giving up their free time to coach the team.

Congratulations to our A and B teams who took part in the Alban Cluster Tournament in January. Both teams played extremely well, with the A team winning the competition overall. The A team are through to the East Bedfordshire finals in February.

Well done everybody in our year 3 and 4 football teams. The A team came first in the East Bedfordshire Championships and the B team came 6th. That's an amazing achievement out of over 20 schools!

Congratulations to all of the children and staff at the school for being awarded Silver in the School Games Mark Award for PE and School Sport.

Our football teams performed brilliantly in the Alban Cluster Tournament. Our A team came 1st and our B team came 3rd, out of 17 teams. Both teams are through to the next round which will also be held at Alban Academy, on Wednesday 15th November.

In January, we will be taking part in the Alban Cluster Tag Rugby Tournament.

On Monday October 17th Mr Blunt will be training our Class 4s to be playground leaders.

On Wednesday 19th October our Year 3 and 4 football teams will be taking part in the Alban Cluster Football Tournament.

We have had a very busy couple of weeks. Last week we took two teams to the East Bedfordshire Athletics Finals where our A and B teams came a very respectable 4th and 8th out of 21 teams. There were lots of individual wins for our athletes and the scores were incredibly close between the leading schools.

On Tuesday 21st June our A and B teams took part in the East Bedfordshire Kwik Cricket finals and again performed very well coming 4th and 6th respectively.

Well done to all of you who represented our school; we are very proud of you!

Congratulations to our year 3 and 4 cricketers who came 1st and 3rd in the Alban Cluster Kwik Cricket tournament on May 4th. Both teams are through to the East Bedfordshire finals at the end of May.

On Wednesday  13th April, years 1 and 2 will be taking part in an afternoon of athletics activities organised by the Sandy School Sports Partnership.

This term years 3 and 4 will be training for the Kwik Cricket tournaments. A coach from Bedford Cricket Club will be supporting our PE lessons.

Congratulations to our tag rugby teams for their success in the East Bedfordshire Finals. The A team were runners up and the B team came sixth. We were the only school to have two teams in the finals so that's a fantastic achievement. We are very proud of you all! Special thanks go to all the parents who came along to give their support on the day; we hope you had as much fun as we did!

On January 27th a team of year 3s and 4s took part in the East Bedfordshire Indoor Athletics competition at Sandy Upper. They took part in a mixture of track and field events. The relays were a really exciting finish to the morning. The team came 3rd out of 11 teams which is another great result. Well done to everyone who took part and for all of the athletes who put in so much effort into the training leading up to the day.
On Friday 15th January, a group of year 8 Sports Leaders from Alban Academy visited the school to lead an activities afternoon for Class 2 . The pupils had a fantastic time and it was lovely to see some of our former pupils. We look forward to seeing them again in the near future.

Congratulations to both tag rugby teams for your outstanding performances in today's tournament. The A team came first and the B team came 3rd. We are now through to the next round on February 10th at Biggleswade Rugby Club.

In January our years 3 and 4 tag-rugby teams will be taking part in the Alban Cluster Tag-rugby Tournament. They will be proudly sporting our new team strip! 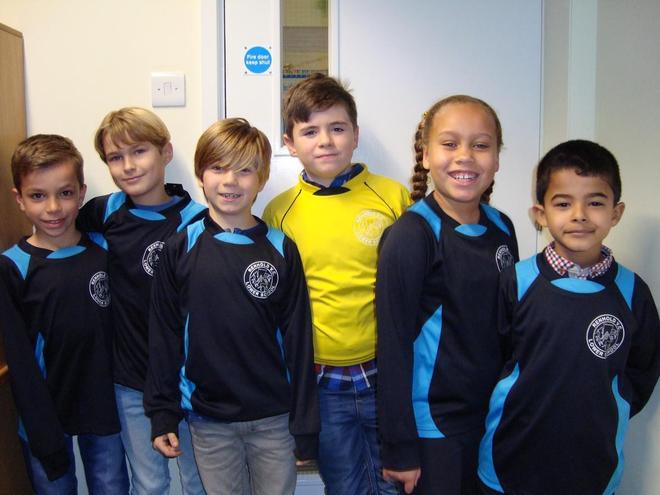 In the East Bedfordshire football finals our A team were undefeated. Unfortunately the final placings were decided on goal difference and so we narrowly lost out to Biggleswade Academy. Well done to the team for your brilliant achievement and thanks to Miss Boast, Mrs Biswell and Mr Biswell for your excellent team management!

Despite the appalling weather conditions, our A team came away as winners of the Alban Academy football tournament. Our B team came 6th which is also a very respectable result! Well done to both teams and thanks to Miss Boast and Mrs Biswell who were the team managers. The A team are now through to the East Bedfordshire tournament which will be held in two weeks time. 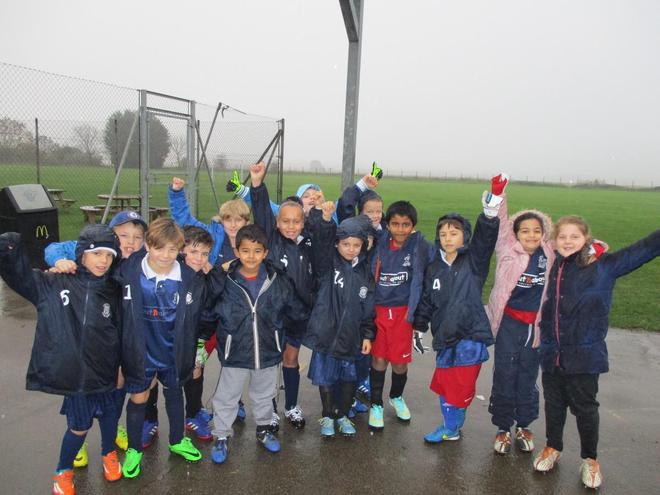 On October 21st our year 3 and 4 footballers will be taking part in the Alban Cluster Tournament at Alban Academy. We have entered 2 teams.
Top
Cookie information
Cookie Notice